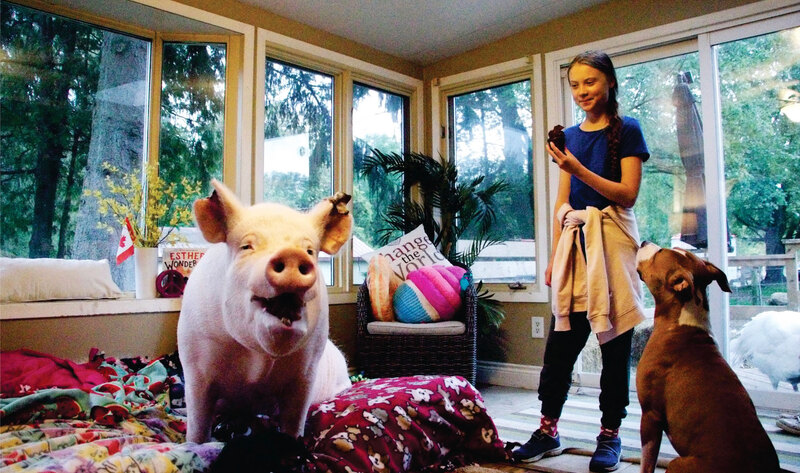 Vegan climate activist Greta Thunberg recently paid a visit to Esther the Wonder Pig, a famous pig that helped her dads Steve Jenkins and Derek Walter go vegan. Thunberg came to the United States via sailboat from her native Sweden last month to speak at the Climate Action Summit in New York City and support Fridays For Future, a movement she founded to demand action on the global climate crisis. Thunberg continued her North American tour by driving an electric car, lent to her by actor Arnold Schwarzenegger, to Canada to attend the climate strike in Montreal last Friday. While in Canada, Thunberg shared a cupcake with Esther at her Southern Ontario home, a moment commemorated by a photo of the two changemakers.

“We were gonna change the world together, but she took my last cupcake so the future of our alliance is uncertain,” Esther’s Facebook page captioned the photo. Thunberg has received backlash from conservatives that do not share her views on the climate crisis and Esther’s page was not safe from commenters looking to disparage the teenager. “This is a picture of a sixteen year old girl that is under more pressure than any of us can likely even fathom, enjoying a quiet day with a pig she loves, with cupcakes and a smile on their faces,” Esther’s Facebook page responded to one such commenter. “No matter what you think of our view on animals or Greta’s view on the climate, if you can’t see the joy in their faces and appreciate the fact that she came here to relax and smile (the same reason you all do) then I’m sorry we have failed you in our mission to promote kindness for all kinds.”

US Gets Its First-Ever Vegan Fried Chicken Shop

The 20 Vegan Burgers to Eat Before You Die