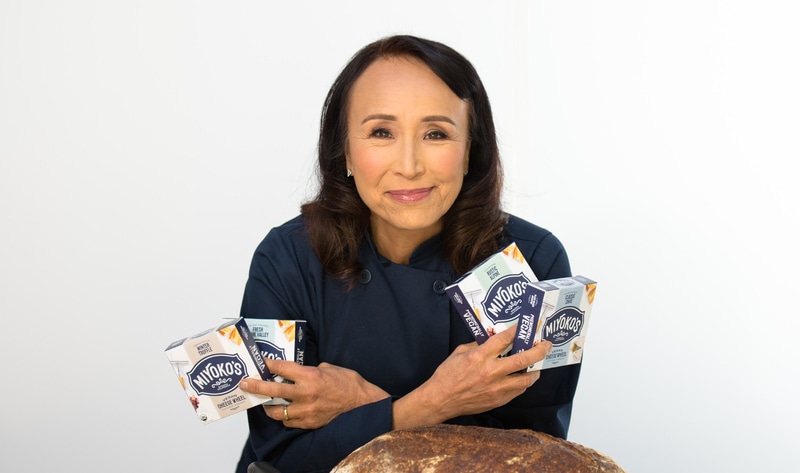 Since its launch in 2014, the Miyoko’s Kitchen brand of plant-based cheese (and butter) has swiftly become the creamy obsession of vegans everywhere. Founder Miyoko Schinner is now a household name, and widely revered as the queen of all vegan cheese. In addition to recently scaling up production of her widely-sought products, Schinner shares that her company has just launched a political initiative to protect plant-based dairy’s right to use the words “milk,” “cheese,” and “butter.” Schinner reveals to VegNews the future of plant-based cheese, what’s new for her cutting-edge brand, and the true nature of her company’s relationship with Nestlé.

VegNews: How has the market for vegan cheese changed since you launched Miyoko’s Kitchen?
Miyoko Schinner: It’s changed not only in terms of the number of players that have entered the marketplace, but it has just blown up in terms of sheer dollars, and the number of people that actually have tried it. It’s estimated to be a $4 billion dollar industry by 2024. And there’s lots and lots of little players all over the world. I have visited many of them. This summer I was in Europe, and I went to a vegan cheese-maker in Budapest … a little tiny hole-in-the-wall shop. I spoke to another one that was in Hamburg. It is completely blowing up, and people are more and more open to it.

VN: Are there any current Miyoko’s projects that you’re particularly excited about?
MS: We’ve got all kinds of new product development in the works, and we’re going to be breaking into other categories that will cross over from the premium cheese category to the snacking category, and to an everyday lower price point. And we’re able to do that without compromising our integrity of ingredients. We’re going to still be whole foods, certified organic, and the flavor-driver is going to come from different cultures and fermentation techniques, rather than added flavors. So it’s really exciting. And we’ll continue to introduce flavors and styles of cheese that will be at a lower price point, to reach wider audiences.

VN: Will we soon be able to find Miyoko’s in more stores?
MS: We’re probably in about 7,000 stores right now. We’ll definitely be in more stores. We just launched at Target. We just shipped our first shipment of butter to Target, so that’s huge. And we’re in more and more traditional grocery stores, such as Publix, Kroger, Wegman’s, and we are adding more to the list.

VN: There’s been some controversy regarding your company’s relationship with Nestlé. What’s the real story?
MS: We were invited to join a world-class “business accelerator” for innovative companies in the food space. The accelerator is focused on innovation in food in order to answer many of the challenges regarding food systems that are facing us today, such as: How do we feed 9 billion people? How do we make it sustainable? The accelerator involves seventeen startups, eight corporations, and dozens and dozens of mentors. In addition to those mentors, we also got paired with Nestlé. There’s no cost to us, we don’t pay a penny, they don’t take any equity. So it’s simply a recognition by all these corporations that things have to change or the world is in dire straights. What I have heard from behind-the-scenes is that yes, it’s true, companies such as Tyson, Cargill, Nestlé are realizing that: 1) they’re losing market share, 2) they’ve done a lot of not very good things in the past, and it doesn’t serve the world. There is a cultural shift happening at many of these companies.

VN: How long do you think it will be before vegan cheese takes over the world?
MS: 10 years. Vegan cheese grew 41 percent last year. We’re growing. Plant-milk grew 9 percent last year. I think plant-based dairy is going to become the new norm. Which is why in our plant-dairy revolution we don’t call ourselves a “dairy alternative” or “dairy-free”; we call ourselves “plant-dairy.” Because there will come a time when we won’t be the alternative anymore.

Maya Gottfried is the Digital Editor for VegNews and author of the books Vegan Love: Dating and Partnering for the Cruelty-Free Gal and Our Farm: By the Animals of Farm Sanctuary.

Source: vegnews.com
The Big Cheese: Miyoko Schinner’s Predictions for the Future of Veganism

8 Vegan Matzah Recipes for Every Day of Passover