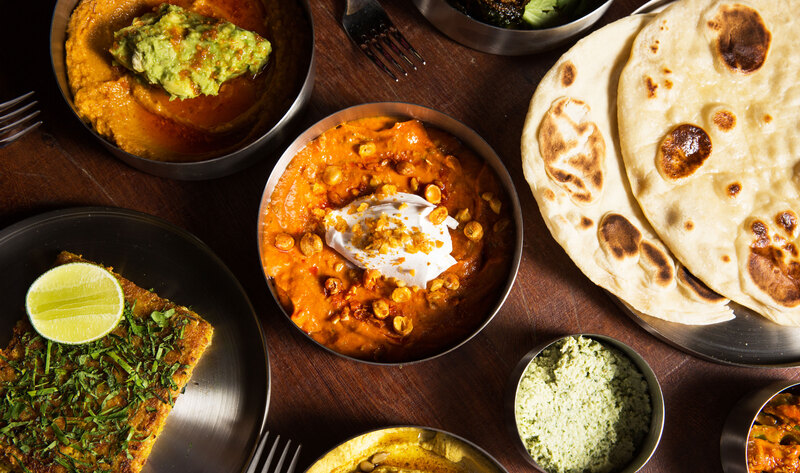 Last week, vegan restaurateur Ravi DeRossi opened all-vegan Indian restaurant Night Music in the East Village neighborhood of New York City. For the new 30-seat eatery, DeRossi drew inspiration from the Indian food that was a permanent fixture of his life growing up in Colorado in an Indian family. He partnered with his mother, Sharmilla Lalchandani, to create the menu and teach executive chef Spencer Caine how to cook all of the traditional dishes DeRossi ate growing up, including Aloo Paratha, Kale and Onion Pakora Chaat, Pani Puri, and Aloo Chaat. The menu also features vegan Naan bread, and cocktails such as the Nightbird (lillet rose, hibiscus, five citrus gin cordial, lime juice, and tonic) and the Green Peacock (martini extra dry vermouth, granny smith apple, coconut, pale cream sherry, and fenugreek). In 2016, DeRossi vowed to transition as many of his then 15 restaurant holdings to be completely vegan to align with his own lifestyle. Since, the restaurateur has removed animal products from his older restaurants Ladybird and Mother of Pearl, and open new vegan eateries such as Avant Garden, Fire & Water, Honeybee’s, and Dollface.

Tuck into colourful fruits and vegetables and see the light