This
site has been bereft of a giant pork roast for too long. This one,
to us, has been worth the wait and it came from the most logical
place. I’ve been Bo Ssam-ing since the
David Chang recipe was published in the New York Times in 2012.
For legions of fans, it quickly became a generation’s go-to
dinner party dish: a spectacularly low-effort, high-reward way to
feed a crowd. The masterful thing about this slow-roast is the way
the exterior takes on a dark, glossy, crisp, varnished edge that
collapses easily under the tines of a fork, revealing pale,
perfectly cooked pulls of pork within, and that you did almost
nothing to make this happen. The ingredients couldn’t be simpler
(got salt? sugar?), and in just a small fraction of the time that
you’ve been liberated from any kitchen toiling while the pork
slow-roasts and permeates your apartment with an unholy delicious
aroma, you make the accompaniments. I wanted the pulled pork recipe
on this site to have all of that, but designed with barbecue-style
sandwiches in mind, no smoker required. 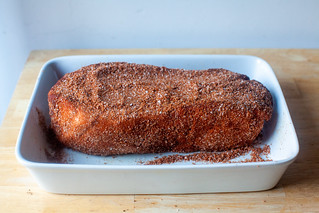 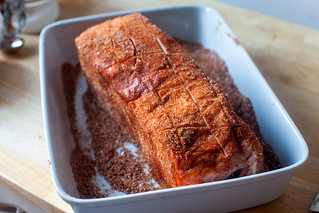 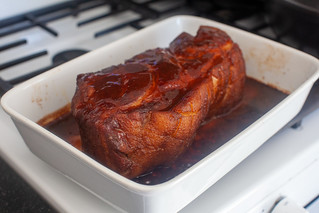 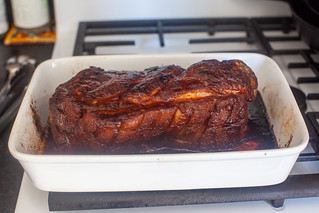 I make a slew of adjustments. Chang’s Bo Ssam calls for a
bone-in pork shoulder or butt but I prefer boneless — it’s
smaller, cooks faster, and has a more dramatic collapse. Instead of
a simple salt and white sugar rub, I channel barbecue flavors,
keeping the salt but swapping in brown sugar, paprika (smoked is
wonderful here) and cayenne. I enlist a thin marinade known as a
mop throughout the process — to initially baste the roast, to
flavor the slaw, to dress the final roast as you pull it apart,
keeping it moist, and then more at the table. We find it eliminates
the need for a standard dark red barbecue sauce, but hey, if
you’re nervous you’ll miss it, here is my simplest
and a more
elaborate recipe. Both sauces keep for what seems like forever
in the fridge. (I will never admit how old my jar is.)