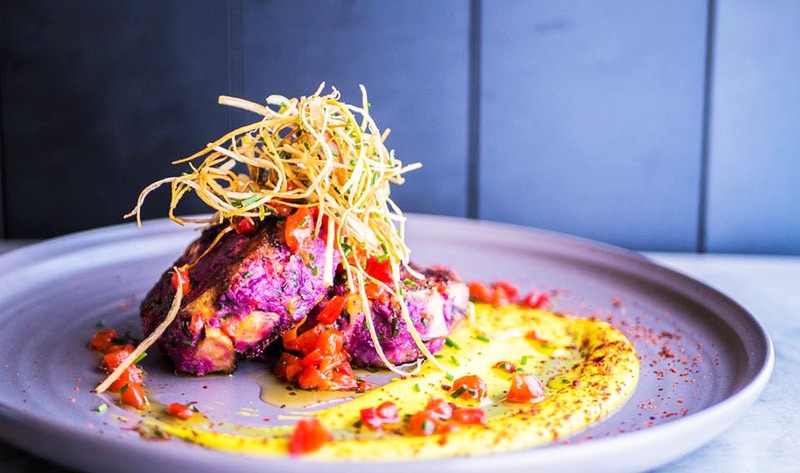 New eatery Casa Terra will open in early January as Arizona’s first vegan fine-dining restaurant in downtown Glendale, a city near Phoenix. Founder Jason Wyrick—an award-winning vegan chef who founded local vegan catering company The Vegan Taste in 2004—created the dinner-only concept to fill a void in Arizona’s burgeoning vegan scene. “I’ve done a lot in my career as a chef, and the one thing that truly inspires me is exploring vegan cuisine and sharing it with people,” Wyrick told AZ Big Media. “For the past decade, I’ve had countless requests to open a restaurant. I’ve realized for a while that despite being one of the largest cities in the country with a burgeoning food scene, Phoenix doesn’t have a plant-forward, fine-dining restaurant, and we need one. Casa Terra had to be the next step in my culinary journey.” The restaurant’s menu is inspired by Mexican, Italian, Moroccan, and Spanish cuisines and features small plates such as Tacos Tapas filled with pibil-style mushrooms, Charred Padrón Peppers drizzled with Calabrian chile caramel, and assorted vegan cheeses served with various accouterments. Larger plates will include wood-fired pizzas, chorizo-topped risotto, and house-made gnocchi featuring plant-based Merguez sausage. Dessert options will include churros with bourbon-vanilla ice cream, flan topped with candied pine nuts, and a Mexican Chocolate Torte decorated with gold leaf. In 2018, the downtown Glendale neighborhood has welcomed several new vegan businesses—including Arizona’s first vegan grocery store Veggie Rebellion—which city officials report has revitalized the area’s economy.